Looking Out, Lookin In

I finally made it over to Alkatraz Island this week to see the work of dissident Chinese artist Ai Weiwei which has been installed there over the past few months, and will only be there a few more weeks. WeiWei is not allowed to leave China, so the installations were created based on photos and plans of the buildings, and he has never seen the final result of his work, at least in person. It was also an excuse for me to revisit Alcatraz (which requires some planning ahead these days because of the volume of tourist traffic). Even with all the visitors, and proximity to San Francisco, it still maintains an air of remote desolation.

This month's image was taken inside one of the buildings where Weiwei's work is installed, where I was drawn to the dilapidation and decay of the building, and in particular, to the panels of broken windows that divide the space. 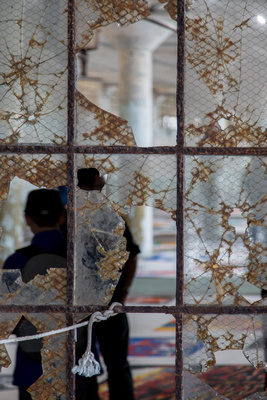 Tied to the PastFeatured Image for April 2015

Tied To The Past

See this image in the Gallery

Weiwei's artwork is about the fate of current political prisoners but it's set in the decaying shell of a prison which last held prisoners decades ago ...the past tied to the present. I felt that this symbol of the crumbling architecture juxtaposed with modern tourists and bright colors of the art, told the story. The knotted rope was a nice bonus.