Up in the Air

Those of you who saw my image in the "Conversations" exhibition at Bucci's last month may notice a thematic similarity to this month's featured image, Three in the Air. People photographing other people, seen from afar.

What's a little different - and the reason I wanted to include it as a featured image for December - is that it's an example of a new approach I'm experimenting with. In contrast to my usual graphic style, this image has a lot going on with many stories seeming to unfold simultaneously around the picture. Each little group adds their own narrative to the bigger one. Here it is: a day at the beach.

Another characteristic feature is that it's taken from above (a cliff top in this case). I plan to slowly add to this series over time. 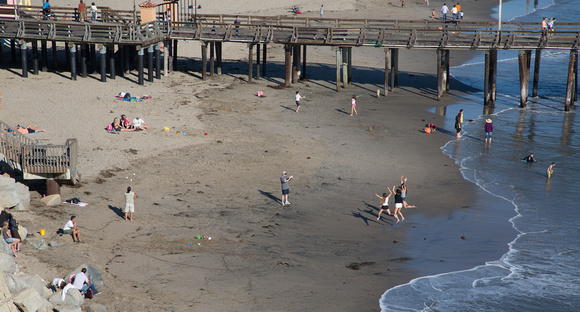 Three in the AirFeatured Image for December 2014

Three in the Air

Those of you on the snowy East coast (or freezing England), may like to know that this was taken just a few of weeks ago in Capitola, just South of Santa Cruz. Ah yes, November on the beach!

Let me know what you think!