I don’t often work in black and white since I feel color is such an integral part of our world, but sometimes, when a scene is otherwise flat and lifeless and color doesn’t define the image, I’ll try a conversion to monochrome just to see how it looks. Occasionally, as in this case, the result is a new perspective on the subject that works better than color.

In this image, a winter sky and leafless foliage cast a uniform grey light over a gradually thawing frozen lake. The revealed water has become a mirror whose reflections merge seamlessly with those inside the waterlogged canoe.

For me, black-and-white seems to better capture that end-of-winter feeling which sees the first signs of victory in the battle against the frost before the real arrival of spring. 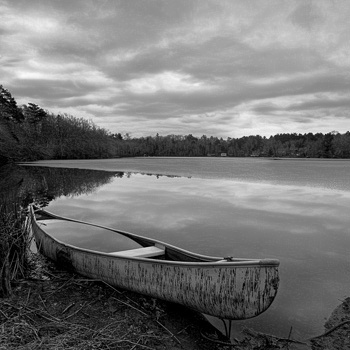 Click here to see the image in the gallery.

This is my featured image for March. Hope you like it!