On time, for a change, here’s my featured picture for May. Something of an experiment – and very different to what you might expect from me. 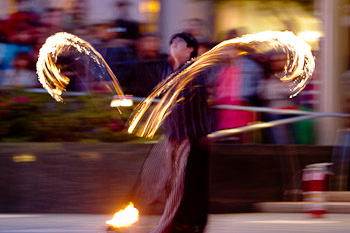 Click here to see the image in the gallery.

This was taken at a performance of fire dancing, held around dusk in Union Square in San Francisco. I wanted to capture a sense of the motion, but also the flow and the grace of the performers. I was positioned at the back of the crowd, without a tripod, but by varying the shutter speed and exposure I was able to get several evocative images – including this one, which is one of my favorites.

Despite the motion blur, the performers’ face is captured at one instant (I wonder if someone tried to take a flash picture at that moment!), giving a sense of the performers’ identity in the midst of the movement and graceful sweep of the flames.