A visit to the ASP

I don’t know about you, but I have been hearing a lot of plugs on the Radio this year for something called the Annenberg Space for Photography (I guess Annenberg underwrites some NPR shows). It is billed as “a space for print and digital photography”, which sounded like an oxymoron to me, but nonetheless, when I found myself in LA a couple of weeks ago, I thought I would take a detour and check it out.

The location is a strange one. I’m certainly glad I had my GPS, because I would never have found it otherwise. It is in a low building overshadowed by a trio of shiny skyscrapers that dominate this part of Century City. As you drive into the cavernous underground parking and head up into the complex, the ambiance is austere with acres of polished marble and glass. The escalators from the parking lot spit you out into a shiny marble-trimmed atrium full of lawyers and account executives going about their business. 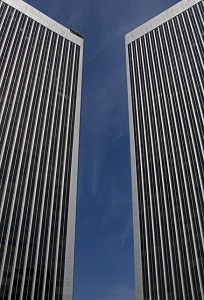 (Yes this photo really IS rectangular! Cool optical illusion, though.)

I was just about to ask the receptionist where the Annenberg center was, when I overheard a couple of other people asking the same question. Clearly this is a common problem – there was no sign anywhere. As instructed, we exited the building through huge glass doors confusingly set in the glass wall at the rear of the atrium which overlooks a grassy area with picnic tables, and headed up the concrete steps to the right. 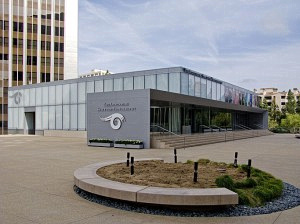 Approaching the "Space". Best not to judge a book by its cover, eh?

Whatever else you may say about the Annenberg Space for Photography in Century City LA, the price is right. Yup it’s free!

I had read on their website that it would take only an hour or two to see everything, but I think that is being generous. An hour will do it – and that includes sitting through an entire multimedia extravaganza projected on multiple screens, large and small, in the central part of the building that takes up most of its floor area.

The space is very modern with sleek curving partitions and a neutral, slightly corporate, color scheme – as a museum might look if it was designed by Apple – and the video screens and consoles that dominate the central space do little to dispel that notion. The visitor is guided around a convoluted path to maximize the display potential, but ultimately it is a small place, and that was the first disappointment for me.

The opening exhibition, “L8S ANG3LES” – which is on until June 28th – includes images from eight Los Angeles based photographers in the genres of fine art, architecture, documentary, fashion, photojournalism and celebrity portraits – less a coherent show than a celebration of the the breadth of work coming out of LA. The small size of the gallery and the large space which is dedicated to multimedia (…but not enough to enough seating!) left me wanting to see more than the two or three works displayed for some of the featured photographers.

The video presentation actually scored high marks for me in its ability to reveal the photographers personalities and allow each each one to talk about their work, but it seemed to me that this was the “main event” and the work on the walls was merely secondary. There was wonderful architectural and portrait work there to be sure, but the majority of the photographs in the show were journalistic (I wonder if the LA times sponsorship was a factor there), and while I agree that harrowing pictures of war torn places are important, I don’t believe that they should be considered art (usually), and they are frankly out of place hanging in a gallery.

In the future, the idea is to use digital presentation in this central area to compensate for the limited physical space available, and to give visitors access to an enormous library of work – projected in high definition or accessed via a console. This explains the distinction made in the ads between “print” and “digital” – convenient certainly, but I’m old fashioned enough to really miss the look and feel of the physical print.

All in all however, I enjoyed my visit to the ASP and I am curious to see how the Space will develop, and how future shows will use the facility. I certainly plan to look in again when I am next in LA and I would recommend anyone with a passion for photography to do the same. Just don’t forget your GPS!