…another “picture of the month”. Yes, it’s time for another brand new never-before-seen image. Will it make the gallery? Let me know what you think! 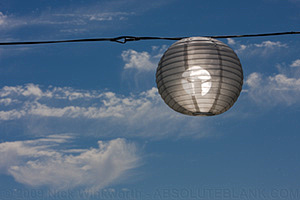 Click the thumbnail to go to the gallery page.

This paper lantern was one of many that were hanging from wires strung between trees. I’d guess there had recently been a party or celebration.

I was struck by the way the shadow of the bulb holder is cast on the paper, and how the shadow of the top opening is so perfectly circular despite the light coming in at an angle (mathematicians among you will figure it out, but I’m guessing it’s because the side of the lantern is curved). It almost creates a mini-sun in the image.

This is one picture that wouldn’t have worked if the sky had been clear blue (so often the case here in California) , but the clouds do seem to have a life of their own. Mostly when I look at them they are just clouds, but every now and again they catch me out and I see a sphere of some soluble material like chalk that is slowly dissolving into the ether.

I just love the way this image is both ordinary and mysterious at the same time,